Long time users artists and IGers with thousands of followers who post content with non sexual nudity have been swept up in the process. This includes @nude_yogagirl who has an Instagram verified account with over 894,000 followers

Nudity rules on Instagram!? Are my photos offensive? There is something I want to share with you now because it has made me frustrated and sad lately. It has continued almost for a year! And this is not serious at all – there are much more important things in life – but still it affects my feelings. This account and you mean so much for me. ❤️ My account hasn't worked normally for several months now. Apparently because I'm nude. #hashtags don't work on my photos, my account is never suggested to anyone by Instagram anymore and NOW when I sometimes try to search @nude_yogagirl (with my personal account) I can't even find it! All I can see are fake accounts that are pretending to be me and using my photos. How is it possible? They haven't been flagged. It's crazy isn't it? 🙈 ❤️ Nudity rules are becoming stricter all the time. And somehow I can understand why, even if it feels unfair. For me that unfortunately means my account's visibility is being limited by Instagram. What about all the people who try and create art on this platform!? Doesn't history tell us that nudity and art go often together? Decisions are taken by moderators/bots in a matter of seconds, whom don't even know the accounts. ❤️ This is my passion, art and life's work. We started NYG on @instagram and Instagram it is. I love instagram…!! But this has bothered me for some time and I just wanted to share my feelings with you. ❤️ Are my photos too bad, too naked to be shown?! Are they rude? Offensive? Because why else nudity should be forbidden, it's natural.

Artists like Susannah Martin have  to censor their work in order to maintain a presence on the popular social media platform. Their post regularly get deleted and their accounts threatened with deletion.

Dear Friends, for those of you who follow me on Facebook, I have been blocked there AGAIN for the next 30 days. I can not post or react to you there so keep in touch here or elsewhere. This time for a post that someone dug up from 2014 ! It's getting weirder all the time. I know you object to the black bars, and so do I. It is a shame. You can follow the link above to my website if you like your art uncensored. Sigh…😑 peace ya'll 💚 #painting #nudepainting #censorship #oilpainting #artcollecting #contemporarycollector #contemporarypainting #figurativepainting #figurativerealism #susannahmartin

Recent posts from artist photographer (world renowned for his nude photography)  Spencer Tunick about his censorship protest at FB headquarters have been banned or deleted.

During this purge hashtags commonly used by naturists including #naturist, #naturism, and many others have been blocked or had content purged/replaced. This makes it harder to find naturist content and naturist accounts. Similarly hashtag for content that may be of interest to naturist like #nudeyoga or #nuedisnormal have also been largely blocked or banned.

Why is this happening?

The answer to the question of why naturism and other hashtags have been blocked is revealed in this report “Instagram is demoting posts to hide offensive and sexually explicit content.“ Basically simple non sexual nudity of any kind is getting associated with sexual and other offensive material and content. Except it isn’t consistent because posts by Playboy and other sexual brands on IG get a pass while ordinary people and most artists who post non sexual simple nudity do not.

Where does it go from here?

Some artist’s like Tunick and the anti censorship  group The National Coalition Against Censorship recently protested the FB/IG censorship action in hopes of getting FB to review its policies. However, IG posts about the protest action were banned. 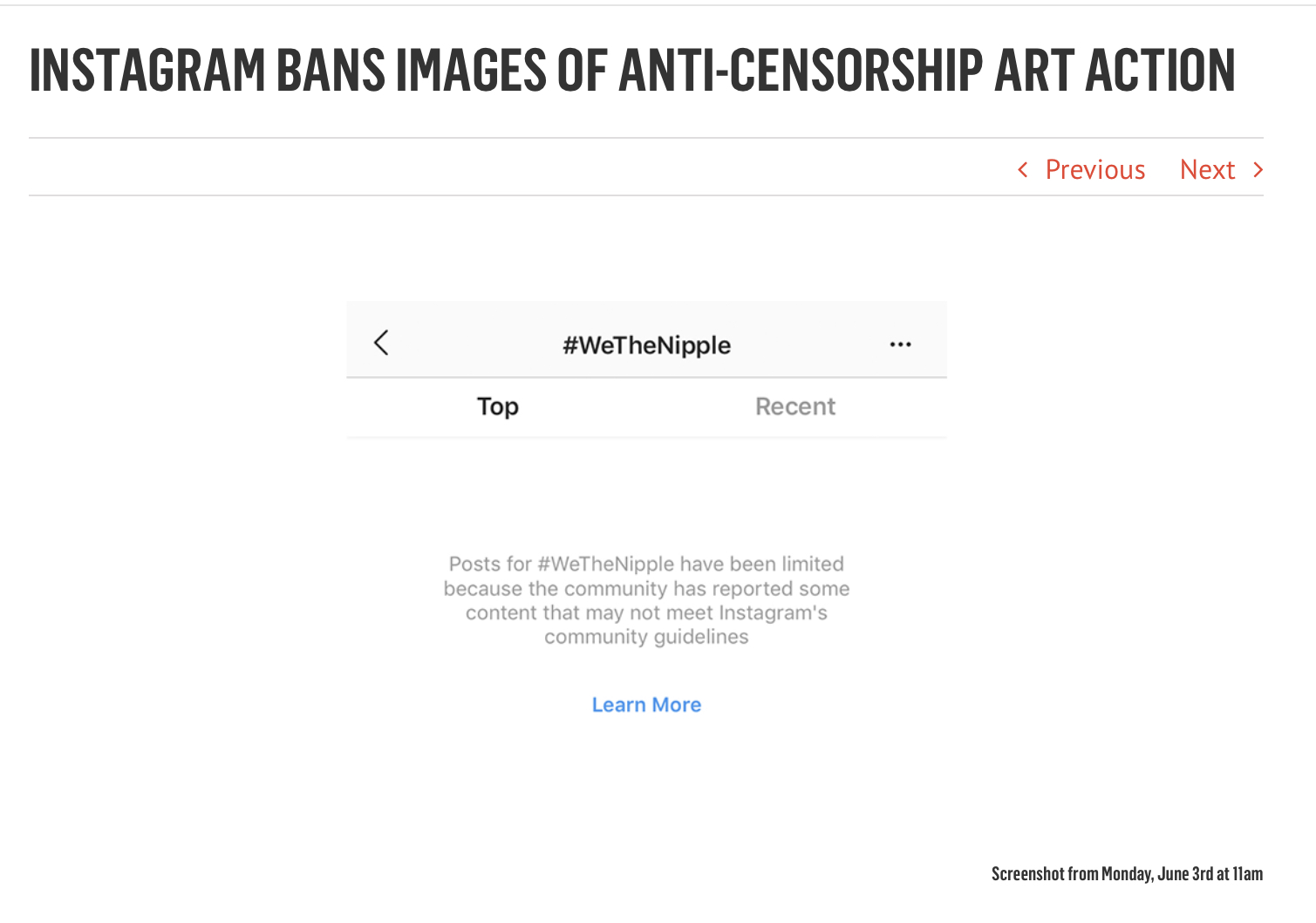 Where do ordinary naturists fit in this?

In my opinion nowhere. As long as FB is allowed to be the sole arbiter of what is offensive and what is allowed naturist will never find any refuge there. Naturists and hose who want to share their xperince of simple non sexul nudity should abandon both FB and IG for more hospitable platforms like Reddit, MEWE or even Twitter. We have established a presence on all three

Those who embrace clothes free living also need to stand up and call out those who poison our presence on social media by coopting our language for monetary or sexual ends.  Only when naturist commit to these two things will there be potential for anything begin to change. Only then can the purge selection be weakened or stopped. What do you think naturists should do? Comment below

About the author: Earl D

The Secret Life of a Naturist Weekly, Episode # 132 “Meet the West’s”

We use cookies to ensure that we give you the best experience on our website. If you continue to use this site we will assume that you are happy with it.OkPrivacy policy