My name is Fabien and I am a self-taught visual artist living in Nova Scotia Canada. Land, seascapes and atmospheric skies are my joy and passion. My home and surroundings have been the inspiration of many of my acrylic works.

I was born in the city of Laval in the province of Quebec in 1963. I have been drawing from the early age of six. Being last of 11 siblings, my mother was a stay at home mom taking care of us with my older siblings having to work to bring in financial support as our father had passed away when I was two. I would draw on anything I could get my hands on. My mom would keep cereal boxes and cut them for me to use for drawing.

I created a super hero comic book that I drew for 20 years much to the delight of my many nieces and nephews. Later, in my early thirties I had a published comic strip in two Montreal paper’s called “The Spice of Life”. I did that from 1993 to 1995 and it was at that time that I met my husband John. John was a musician and worked for the National Film Board of Canada.  He was originally from Nova Scotia and I had never been.  During a summer vacation to visit his family in 1996 we decided to move here a year later.

I had never painted before, and as a birthday gift John bought me a French easel and acrylic paints and being in Nova Scotia the beauty of the ocean was the basis of my inspiration.  And yet, something was missing.

I became a naturist six years ago and I suppose, I can attribute it from an aunt and uncle we visited in Connecticut almost every summer. I was eight and heading back to the house from fishing and caught my uncle fully nude on a ladder painting the siding. As I ran into the house and told my aunt she explained that my uncle was a nudist except indoors while there were guests where he would only be in his underwear and tank top.

That always stuck with me but being from a large Catholic family being nude was a definite no-no. It was thanks to Twitter that I found other naturists. Whenever John was on a business trip to Montreal I would take advantage of my alone time to being nude.  My love for art and my newly discovered naturist life became intertwined.  Being clothes free while painting is liberating and cleaning up is easier if I happen drop any paint on myself.

In 2014 through Meetup I discovered a naturist group that would organize naturist swims at our only nude beach near Halifax as well as a few secluded lakes. During the winter we would rent a pool and continue our swims and do our yoga. What a feeling of pure joy meeting others with the same interests.

It had taken me a while before I could confide in John my desire to walk around the house naked. At this point I had been locking myself in my studio and when going to bed. I haven’t worn anything to bed since I was nineteen.

He didn’t quite understand the need to be naked all the time and certainly in front of strangers. Eventually he came around and allowed me my freedom to paint and meditate in the nude. Nova Scotia winters can often be brutal and cold and our house never seems to get warm enough.  Once spring and summer comes around, off come the cumbersome layers.

Through my naturist group and certain social media accounts I can be myself. I started to do some naturist portraits of some of my followers on Twitter. I slowly began to confide with my family and close friends and certain co-workers I knew I could trust. The past seven months have been difficult for me having gone through an extensive tongue surgery for cancer last November.  It was then followed by 33 intense treatments of radiation from mid-January to the beginning of March.

Speech is still difficult and the pain is being managed and I am eating a little more solid foods.

I know my strength is slowly coming back as I went to the naturist pool swim on Saturday May 20th. This past Sunday May 28th I held my second session of the Men’s Naked Drawing Group Halifax.  A venue where artists and model are nude.  The group is based out on the Men’s Naked Drawing Group in New-York started by artist Shungaboy.  We had a good group and the ease we felt being nude and drawing was so natural that I hope to continue these sessions on a monthly basis.

You can view the session on my blog: http://wp.me/p5sulw-HJ

My life as a naturist and artist are now in perfect alignment and I couldn’t be happier.

Be Free and Naked 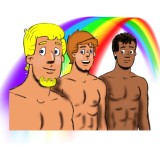 Artist and Naturist. Last of 11 siblings born in Laval Quebec, now living in Nova Scotia with my husband John.

I am a self-taught artist and have always loved to draw. I created his first comic book super-hero when he was six and over the span of 20 years created 90 books. My biggest fans were the many nieces and nephews of my large family. I had my first published cartoon strip "The Spice of Life" in two local Montreal papers from 1993 to 1995.

I moved to Nova Scotia in 1997 and started to paint watercolours after falling in love with the province and its people. John then introduced to acrylics in 2006 and had a few paintings in auctions for local charities. I am a tongue cancer survivor that I was operated for in November of 2016. I enjoy living life to the fullest and being nude as much as possible. I enjoy swimming, reading, yoga and meditation.

No Events were found.